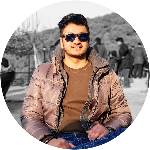 Deep Learning is a subset of Machine Learning which has come to evolve highly in the past few years. It involves neural networks with the number of hidden layers greater than one, hence the term “deep”. The basis of a neural network in deep learning is Logistic Regression and one should understand it well before moving ahead constructing neural networks. Following are a few basic terminologies and their explanations that are vastly used in deep learning. This should give you a basic understanding of how a deep neural network is trained and the strategies to make it efficient.

This concludes the first part of “Practical Aspects of Deep Learning”. For more details, please go on to the next post from here.

Implementation of a Neural Network from scratch

Welcome to the second part of the post. In this half, we will be implementing RandomForest regressor on our own dataset. For that first, you will need to have a dataset. The one that I used is a we...

These are some of my notes taken from the first course of Deep Learning Specialization (Neural Networks and Deep Learning) by deeplearning.ai. This might help you gain insights on how a neural netw...